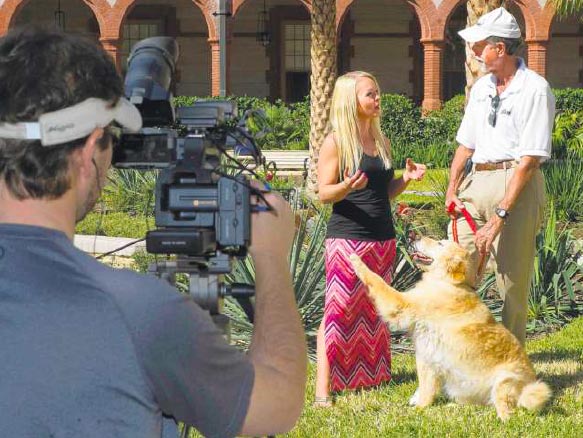 St. Augustine is well-known as a walkable city, and now it’s getting extra recognition for being a good place for pets to pad around as well.

The city is going to be among several Florida destinations featured in an upcoming television show called “Pets Welcome Here!” The show’s crew took footage of some of the area’s more famous attractions Tuesday with their canine friends — some they brought and some that were local “volunteers.”

Executive producer Heather Eisenstadt, with Class of 64 Productions, said St. Augustine was picked because of its reputation as a place where visitors are welcome to bring their dogs. Also picked were Destin, Winter Park and Key West.

“[We’re] going to all the most incredible and dog-friendly destinations you can imagine and seeing life from a dog’s point of view,” Eisenstadt said. “You [St. Augustine] are so incredibly pet-friendly. You allow dogs just about anywhere, and that’s so cool. They can enjoy St. Augustine along with their parents.

“I think a lot of people love to come here because of the history, because of the beaches. And because your beaches are pet-friendly, which is unusual.”

1. St. Augustine has never really tried to market itself as a pet-friendly place for tourists, Hensler said. That’s just what St. Augustine is.

Hensler said the television program, which will be syndicated and run on a major network some time after mid-May, will be a nice way to show another attribute of the area.

“It seems to underscore the friendly, casual nature of our destination,” he said. Among the locals bringing their dogs Tuesday was Candy Sheaffer, who showed off her cocker spaniel rescue dog, Savannah. It’s just fun to bring your dog downtown,” said Sheaffer, standing in front of Flagler College. “We [also] do a lot of walking on the beach.”

A native of Gainesville, van Blokland produces, writes and serves as host for several travel series. “I grew up coming to St. Augustine. I know it inside and out,” she said. “We chose it for our show because of the historic value.”

One of the more interesting pet-friendly activities she found was a free tour from Tour St. Augustine that’s offered once a month for people who want to bring their dogs.

Tour guide Marc Rittman gave a portion of the tour Tuesday morning for the “Pets Welcome Here!” crew and the assembled pooches. He said the fact that so many restaurants and attractions allow pets makes it easy to take dog lovers all over town.

If you missed our last episodes you can watch it now.